Burhanpur is the administrative headquarters of Burhanpur district of Madhya Pradesh. It is located on the south western border of Madhya Pradesh, very near to Maharastra and lies to the banks of river Tapti . It was founded in 1388 by Malik Nasir Khan and was named after well-known medieval sufi saint, Burhan-ud-Din. Burhanpur became famous during medieval period. It was long ruled by Muslim rulers before coming under the rule of Marathas and then British. Effect of Muslim culture and Maratha traditions can be very well seen in this town of Madhya Pradesh. The old historic forts reminds of the splendid era of Faruqi and Mughal dynasty. There are many Hindu, Muslim and Sikhs holy places in Burhanpur. Apart from its historic past it is also famous for its textile industry. A wide variety of textiles can be shopped from here. 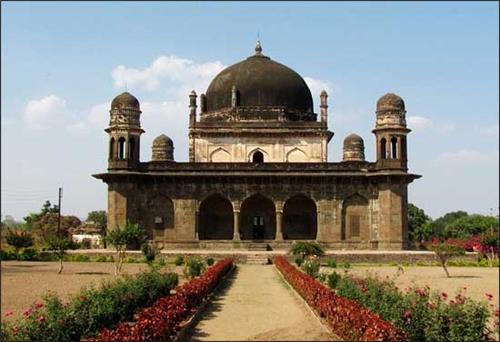 Many coins, idols and temples that belong to varying periods of history can are excavated from this town. Burhanpur in Madhya Pradesh was discovered in 1388 by Faruqi dynasty Sultan of Khandesh, Malik Nasir Khan. It then became the capital of Khandesh dynasty. Then Miran Adil Khan II ruled Burhanpur from 1457–1501. During this time Burhanpur came up as a center of trade and textile production center. Akbar in 1601 conquered Khandesh sultanate and Burhanpur became the capital. In 1609 Burhanpur became the headquarters of Mughal provinces of the Deccan under Parviz, who was the second son of Jahangir. During the rule of Shah Jahan the city gained great heights and became an important outpost of the Mughals. In 1681 Maratha ruler Sambhaji raided the city, but was executed by Aurangzeb for his crimes. Peshwa Bajirao during his reign to Malwa and Delhi took the command of the city. Sadashivrao Bhau defeated the Nizam of Hyderabad and took control of the city. After Third Anglo Martha War in 1818, the rule of the area came under the English East India Company. Read More........

Geography and Climate of Burhanpur

Located at 21.3°N 76.23°E coordinates , Burhanpur is situated near the banks of Tapti River in the southwestern border of Madhya Pradesh. It experiences a moderate type of climate.


Places of Interest in Burhanpur

Burhanpur is famous for its spiritual places of Hindus, Muslims and Sikhs. There are remains of many temples belonging to pre historic times. Coins, goddess idols have been excavated from these temples. Many splendid forts were built during the Mughal period. There are many tourist places here like Jami Masjid, Biwi ki Masjid, Raja ki Chhatri, Badshahi quila,Tombs of Nasir Khan & Adil Shah, Khooni Bhandar etc. Badshahi Quila built by the Faruqi rulers the fort is a majestic example of Faruqi and Mughal architecture. It was once resided by Shah Jahan. Only the ruins of the fort are left now. Emperor Aurangzeb in honour of Raja Jai Singh, the Commander of the Mughal force in Deccan ordered for the construction of the Raja Ki Chatri, which is one of the marvels of the town. Another famous place is Ichchha Devi temple which is located at a distance of 23 kms from Burhanpur. The temple was built as a result of the fulfillment of the desire of a son by a Maratha governor. Read More......

Events and Festivals in Burhanpur

The nearest airport to Barhanpur is Indore airport which is 180 kms from Barhanpur. There are regular bus services from Barhanpur which connects it to other parts of Madhya Pradesh. Barhanpur has its own railway station


Economy and Industrialism in Burhanpur

Burhanpur is an economically developed place. It has been a major trade center during medieval period. It is well known for its textile industry. It is known for Grey Markin, interlining cloth, Cambric, Bleached Dhoti, Power loom Cloth bakram and other types of fabric. There are many oil mills, cotton factories, pipes and agriculture manufacturing units.


Burhanpur at a glance