Asirgarh Fort is located 20 kms from Burhanpur of Madhya Pradesh. It is situated on Satpra range. The beauty of the location is further intensified by the accompanied Narmada and Tapti river valley. The fort is located at a very strategic location between North India and south India, and hence it is also called as "Door to South India" or "key to the Deccan". In Mughal era it was believed that Deccan starts from here and the kingdom from Asirgarh to Delhi was called Hindustan. The fort was built by Ahir dynasty king Asa Ahir.


Origin of the name 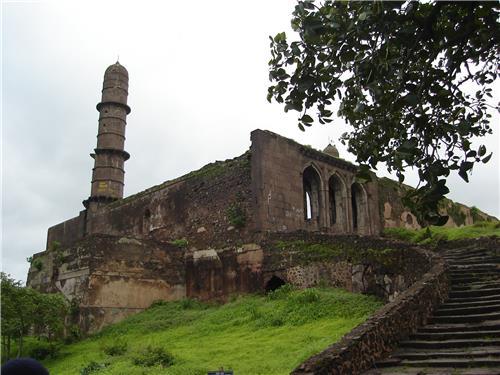 The fort was built by Ahir dynasty king Asa Ahir. It was previously known as Asa Ahir Garh, later on the name was changed to Asirgarh Fort.

The fort was built by Ahir dynasty king Asa Ahir. The Mughal emperor in 1536 after the conquest of Gujrat visited Asirgarh. It is believed during medieval period Asirgarh has been conquered by many kings. Akbar has asked Raja Ali Khan to submit himself, the later dropped his royal title of "Shah" and pledged suzerainty to Akbar. Raja Ali khan has also built many buildings like Jama Masjid in the upper portion of the fort of Asir in 1588, Idgah at Asir. Bahadur Khan (1596–1600) who was a successor of Raja Ali Khan denied to pay homage to Akbar, which enraged Akbar. He conquered Burhanpur without opposition and stayed there for four days. Mumtaj Mahal, wife of Khurram later crowned as Shahjahan died here while delivering her 14th issue.


Places of Interest in Asirgarh Fort

There is a Temple, a Masjid and a Gurudwara (Sikhs worshipping place) inside the Fort which are largely used for religious purposes. There is also a place inside this Fort. Opposite to Shiva temple is a place where criminals were hung and later on were thrown over the cliff. The Shiva temple is believed to be very old. It is believed that Ashwathama (character from Mahabharat) used to come to pray to Lord Shiva daily. Inside the fort are also graveyards of many Britishers with some intact tombstones. There is a huge natural water tank inside the Fort, which is believed to be the source of water for the residents of the Fort.

Explore more about History of Burhanpur