Business and Economy of Burhanpur

Burhanpur is a mid-sized city in Madhya Pradesh. It is situated on the banks of Tapti River. Burhanpur is famous for its textile industries. It is also the hub for Power Loom industry in Madhya Pradesh. The manufacturing industry is also prevalent in the region, both manufacturing of pipes and agriculture equipment is done here. Several cotton and oil mills are also there.

It is also the largest producer of bananas in Madhya Pradesh and also has a largest paper mill in Madhya Pradesh. It is a huge market of Unani Medicines. The cotton is cultivated at a large scale in Burhanpur catering to the huge demand of textile industry.

Agriculture and Horticulture in Burhanpur

Burhanpur is not a agriculture predominant area. It is Cultivation of cotton and bananas are the major agricultural produce in Burhanpur. Most of the farmers are occupied in the production of these two major crops. Burhanpur is the largest producer of banana in Madhya Pradesh. Apart from them Soybean and Sorghum are cultivated in good quantities. Other crops that are cultivated here are pigeon pea, wheat, gram, chilly, coriander, mangoes, oranges etc.

Industrial and Economic Development in Burhanpur

The main economic source of Burhanpur is textile industries. It is the hub for Power Loom industry in Madhya Pradesh. It has one NTC (National Textile Corporation) project 'Tapti Mills' and many other textile companies like Kamal Textiles, Annapurna Calandering Works,Paras Process,Neel Kamal Processors,Shivam Textiles, Ambey Process Etc. Burhanpur is known for Cambric, Bleached Dhoti, interlining cloth, Grey Marking, Power loom Cloth bakram and other types of fabric . Pipes and agriculture equipments industry also contribute to the economy of the Burhanpur.  'Texmpo Pipes', Balaji industry are pipes and agriculture equipments manufacturing industries. Several cotton and oil mills are also the contributing factors of economy in Burhanpur. The wood and wood based furniture industry is also prevalent in the region. The paper industry of Burhanpur is the largest in Madhya Pradesh.

Contribution of Tourism in the Economy of Burhanpur 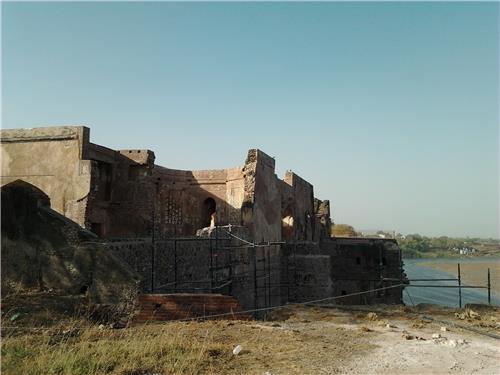 Burhanpur is a historic place having a vast history. Many history lovers and archeologists visit Burhanpur to learn more about the splendid past of our country. Burhanpur was an important city during medieval period especially during Mughal and Maratha period. The Mughal history is incomplete without taking the name of Burhanpur. The tourism industry is an important industry of Burhanpur. There are many hotels, lodges, guesthouses for the tourists. Apart from people visiting to see and praise the splendid architecture of Mughal period, a lot of people visit here for business purpose.  It is the adobe of many religious and historic places which are largely visited by the peple from all around the country. It is also known as a pilgrimage center for Muslims and Sikhs.

Forests as the source of economy in Burhanpur